The X-Men Ask: What If Phoenix Had Not Died? 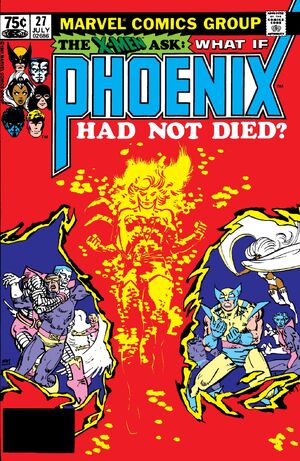 Publisher
Marvel Comics
Previous Issue
Next Issue
What If? #26
What If? #28

Appearing in "What If the Phoenix Had Not Died?"Edit

Synopsis for "What If the Phoenix Had Not Died?"Edit

Uatu ponders over the story of the Jean Grey as the Phoenix and recalls her journey alongside the X-Men. He sees an alternate reality where she did not die during the incursion with the Shi'ar. In this alternate reality, she was reborn again and when the X-Men are called to battle Galactus and Terrax in the Shi'ar galaxy, she unleashes the Phoenix force. She stops Galactus and is thanked by Lilandra for this. She begins to be overwhelmed by the Phoenix force and destroys asteroids and a small star. Upon returning to the X-Mansion, Shadowcat chastises her for destroying another star. Jean again delves into the Dark Phoenix form and destroys Shadowcat. The X-Men try to stop her and she kills Polaris as well. Cyclops tries to stop her and she kills him. This causes her to be engulfed in the Phoneix force and she destroys the Earth.

Uatu recalls the story of Astron on the planet Uranus. He has found the Kree Sentry #213 destroyed. He goes to speak to his fellow exiled members and tells Uranos to stop the destruction of the Kree weapons. Uranos calls him a coward and says he is building a spaceship to travel back to Earth. Astron tells Uranos he is not leaving Uranus and he is left on the planet. Uranos heads toward Earth as the Kree land on Uranus and realize their Sentry is destroyed. They chase after Uranos' ship and blow it up as it passes Saturn.

Retrieved from "https://heykidscomics.fandom.com/wiki/What_If%3F_Vol_1_27?oldid=1472747"
Community content is available under CC-BY-SA unless otherwise noted.