Start a Wiki
What If the Avengers Had Never Been? 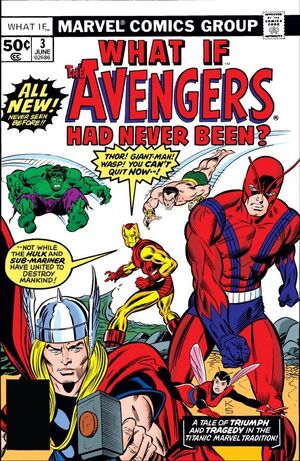 Publisher
Marvel Comics
Previous Issue
Next Issue
What If? #2
What If? #4

...for that day, Henry Pym, Janet van Dyne and Rick Jones dedicated themselves to the memory of Anthony Stark, the first Iron Man, whose damaged heart finally stopped as he sacrificed the power of his chest device to save the lives of his Armored Avengers.

Appearing in "What If... The Avengers Had Never Been?"Edit

Synopsis for "What If... The Avengers Had Never Been?"Edit

Hulk's departure from the Avengers caused a rift that led to the end of the Avengers, since they felt they couldn't go after him. Stark contacts Rick Jones to find the Hulk, while Thor went back to Asgard and Jan and Hank went back to being "normal" people.

Like in 616, Rick locates the Hulk and goes after him on his own, and is being held hostage when Stark goes to rescue him. They barely survived the Hulk encounter, and managed to make it back to the Mansion.

Also like in 616, Namor and the Hulk teamed up and challenged the Avengers to a fight to the death, though in 776, the Avengers were disbanded. Stark accepts the challenge, and builds Iron Man armor for Hank, Jan and Rick so they can all stand up to the Hulk and Namor together.

He introduces the armor to the other three, who can't control themselves in it, and decide to stay in retirement instead of wearing the armor, much to Stark's dismay. Alone again, he overrides the limits of his own armor, and transfers more than the maximum amount of energy into it, setting him up to fight one final ultimate battle.

He starts out the fight fairly well, but ends up about to be finished off when Jan, Hank, and Rick show up in their armor, able to turn the tides. Hank takes a hard hit from Hulk and is relying on his armor to keep him alive, so Tony transfers the energy that was keeping his heart going into Hank's armor, allowing him to have the Hulk on the ropes while Namor is continuing to pound on Rick. As soon as Hulk realizes that it's Rick that Namor is pounding on, he stops fighting the rest of the Avengers, and starts fighting with Namor. They fight to a standstill under the water, and part ways neutrally.

The rest of the Armored Avengers mourn Tony Stark's sacrifice and death.

Henry Pym! Can't you see that this color clashes with my eye shadow!
— Wasp

I wish Tony had consulted with my fashion designer, though. This does nothing for my figure...
— Wasp

Oh, Iron Man! I'm so frightened! Do something! Please!
— Wasp

Retrieved from "https://heykidscomics.fandom.com/wiki/What_If%3F_Vol_1_3?oldid=1472723"
Community content is available under CC-BY-SA unless otherwise noted.