Start a Wiki
What if Spider-Man's clone lived? 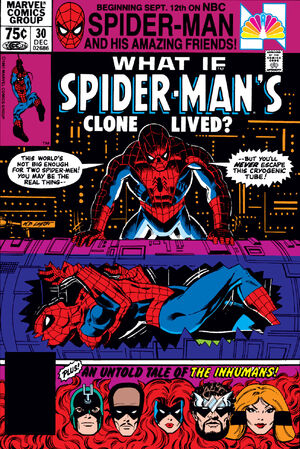 Publisher
Marvel Comics
Previous Issue
Next Issue
What If? #29
What If? #31

Appearing in "What If... Spider-Man's Clone Lived?"Edit

Synopsis for "What If... Spider-Man's Clone Lived?"Edit

Spinning off of the events in Amazing Spider-Man issues 148 through 150, the major change happens when one of the two Peter Parkers is able to knock the other unconscious during their struggle. Other events still occur as originally depicted, with the exception of an extra Spider-Man. Taking the unconscious Spider-Man back to Professor Warren's laboratory, the conscious Spider-Man puts him into a suspended animation pod until he can figure out what to do... but not before noting that 'the clone' looks a couple of years older.

As Peter goes off to try and rebuild his life, things start to go wrong. Peter finds out that he no longer lives with Aunt May, nor does she live in her home any more. Even more confusing, Peter finds out that he's now dating Mary-Jane Watson and can't even remember where his new residence is. After some poking around, Peter is finally able to find his current home and starts to see if his life has really changed that much - assuming it to either be amnesia or 'the clone' living his life for a while. Peter soon comes across a collection of letters from Gwen Stacy and a newspaper article covering her death. As Peter reads on, though, he realizes that none of this even remotely sounds familiar. As if the last three years had somehow been skipped over completely.

In desperation, Peter goes to Warren's lab and soon finds the secrets of Warren's cloning process. Interestingly enough, it turns out that Warren's process even clones the memories of the person at the date of their sampling. Peter then finds a record of the samples taken during one of the classes he'd taken from Professor Warren - only to remember that it was the last thing he remembered from before the whole adventure! With a realization of horror, Peter realizes that he is the clone, not the original.

Regardless, Clone-Peter tries to go through the original's life as if it is his own, soon finding himself overwhelmed with the schoolwork and even the personal changes that have happened in the original's life. While out on patrol later on, Clone-Peter is ambushed by the Kingpin's forces - and the clone quickly realizes exactly how out-of-his-element he really is.

Finally, urged on by his conscience, the clone returns to Professor Warren's lab - intent on making a final decision on what to do. Wrestling with the decision, Clone-Peter wobbles back and forth between killing the original or setting him free. Finally, he makes the decision and smashes the capsule - freeing the original Spider-Man. Together, the clone and the original set up a trap for the Kingpin. The Clone, dressed as Peter Parker, pretends to get captured while the original, dressed as Spider-Man, fights the Kingpin directly. Soon enough, the two Parkers overwhelm the Kingpin and his flunkies - capturing them all without breaking a sweat.

Our story ends in Peter Parker's apartment, with the clone making a decision to move on and get his own life - even changing his name. However, the original proposes the two of them lead a true double-life - that they alternate being Spider-Man, and live together as brothers. The clone accepts, but objects to the idea of the original getting all the perks while he's stuck with the problems (and the couch).

Retrieved from "https://heykidscomics.fandom.com/wiki/What_If%3F_Vol_1_30?oldid=1472014"
Community content is available under CC-BY-SA unless otherwise noted.