Start a Wiki
What If Someone Else Besides Spider-Man Had Been Bitten By the Radioactive Spider? 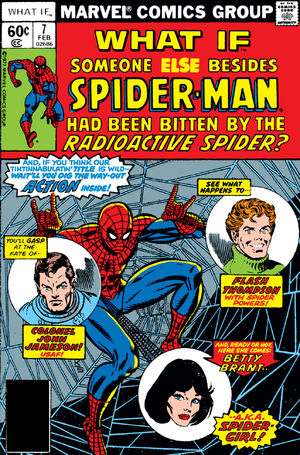 Publisher
Marvel Comics
Previous Issue
Next Issue
What If? #6
What If? #8

Uatu recounts how Peter Parker became Spider-Man in preparation for alternate versions of the story.

Flash Thompson is bitten by the spider instead of Peter Parker. Peter, noticing the spider takes it with him to run some tests. Flash goes on to become a super hero and fights crime while Peter becomes his biggest fan. However, when Flash has his first fight with a super villain, the Vulture, he is dropped by his enemy in mid-flight. Flash, not being the science whiz that Parker is, never developed web fluid and is therefore unable to break his fall. He dies in an alley watched by Parker.

Betty Brant is present at the demonstration and is bitten by the spider. Once again, Parker discovers the spider and takes it into his possession. Betty confides in Parker that she has spider powers and Parker aids her in becoming a heroine, designing a costume and building her web shooters. Betty fights crime but refuses to use her spider strength in battle. However, when a criminal escapes from Betty she later finds out that he killed Ben Parker, and she punches the criminal in a rage. The blow proves to be fatal. Unable to cope with the fact that she took someone's life, Betty gives up on the life of a crime fighter and goes back to living an ordinary life.

Appearing in the 4th StoryEdit

Synopsis for the 4th StoryEdit

John Jameson is bitten by the radioactive spider. As was the case in the previous two stories, Parker obtains the spider. John's father Jonah Jameson learns of his son's new powers and immediately starts to endorse him in his paper and encourages him to become a crime fighter. John agrees and dons a costume and a jet pack. Like Flash Thompson he does not develop web shooters, and when the runaway space capsule falls to Earth, he relies solely on his jet pack to slow its decent. Unfortunately, the pack is not strong enough to slow the capsule's fall and he is crushed beneath it.

Retrieved from "https://heykidscomics.fandom.com/wiki/What_If%3F_Vol_1_7?oldid=1472727"
Community content is available under CC-BY-SA unless otherwise noted.