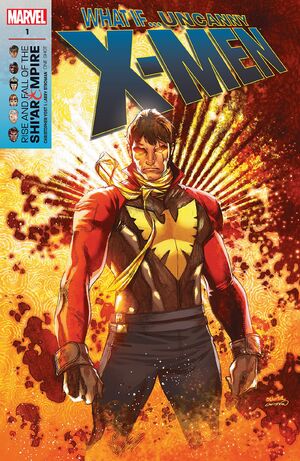 Publisher
Marvel Comics
Previous Issue
Next Issue
What If...? Annihilation
What If...? Civil War

Appearing in "What If Vulcan Gained the Power of the Phoenix?"Edit

THE RISE & FALL OF THE SHI'AR EMPIRE was an X-Men event like no other. Fresh off X-MEN: DEADLY GENESIS, Ed Brubaker took Marvel's mighty mutants off Earth and on an intergalactic journey to stop VULCAN, the third Summers brother, from exacting revenge on the Shi'Ar Empire! But in that final battle in front of the M'Kraan Crystal, what if Vulcan absorbed the very energies that contained it many years ago? In other words, what if Vulcan became PHOENIX? When his unlimited rage is fueled with unlimited power...who will be able to stop him now? Writer Chris Yost (X-23, New X-Men, TV's Fantastic Four) welcomes the return of legendary X-Factor and Alien Legion artist Larry Stroman to the X-Universe with this action-packed issue.

Retrieved from "https://heykidscomics.fandom.com/wiki/What_If%3F_X-Men_-_Rise_and_Fall_of_the_Shi%27ar_Empire_Vol_1_1?oldid=1472802"
Community content is available under CC-BY-SA unless otherwise noted.