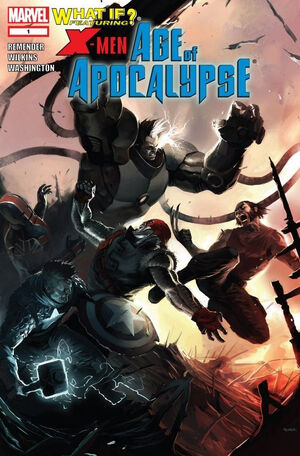 Publisher
Marvel Comics
Previous Issue
Next Issue
What If? Wolverine Enemy of the State
What If? X-Men Deadly Genesis

Appearing in "...What If Legion Had Killed Xavier and Magneto?"Edit

Synopsis for "...What If Legion Had Killed Xavier and Magneto?"Edit

With Magneto and Professor X both dead, there is no one to help the survivors rise and defeat Apocalypse. A team of Defenders goes to fight to end Apocalypse's rule. Apocalypse's Horsemen fight them and many die on both sides. Nate Grey finds Apocalypse and kills him, taking his armor. Stealing the Eye of Agamatto and leaving Brother Voodoo to die he merges the powers. Only Captain America and Wolverine remain and can not stop him as he opens the time stream trying to change what happened. Captain America manages to fire a last desperate shot of lightning through Thor's hammer, but it is even more catastrophic then anticipated. The power goes through many universes and kills all, making them all even worse off then before.

Retrieved from "https://heykidscomics.fandom.com/wiki/What_If%3F_X-Men_Age_of_Apocalypse_Vol_1_1?oldid=1472803"
Community content is available under CC-BY-SA unless otherwise noted.