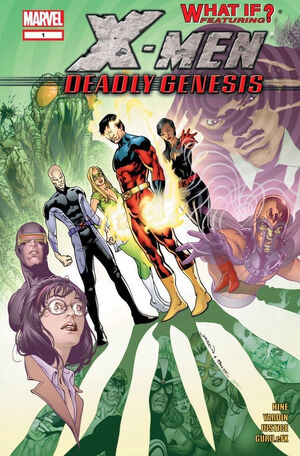 Publisher
Marvel Comics
Dan Buckley
Previous Issue
Next Issue
What If? X-Men Age of Apocalypse
What If? Featuring Planet Hulk

Appearing in "What If Xavier's Secret Second Team Had Survived?"Edit

Synopsis for "What If Xavier's Secret Second Team Had Survived?"Edit

The story opens with Vulcan making a microwave dinner and watching his biography, which starts with his X-Men team taking down the Brotherhood. He walked up on stage and they recapped his life, showing him escaping the Shi'ar and joining the X-Men. It then showed Cyclops sculpting statues with his beams while watching the bio, and the Professor messages him mentally, saying Krakoa was discovered. After the bio was over, he met with the X-Men and Cyclops, who saw what he did. He then attacked them, and Darwin depowered him while Sway held him in place. The bio ends with him supposedly going to an alien planet to defend against the Shi'ar. He then leaves the building and is revealed to be trapped on Krakoa alone, with a time loop set in place. We then see him accidentally kill Marvel Girl and Havok. He then murdered the others. The story ends with him saying, "How many times do you have to see someone die before you feel nothing at all?"

Retrieved from "https://heykidscomics.fandom.com/wiki/What_If%3F_X-Men_Deadly_Genesis_Vol_1_1?oldid=1488877"
Community content is available under CC-BY-SA unless otherwise noted.