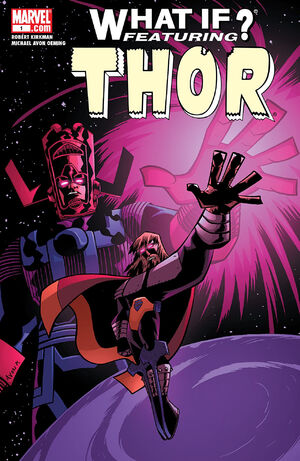 Publisher
Marvel Comics
Previous Issue
Next Issue
What If: Daredevil
What If? Avengers Disassembled

Appearing in "What If Thor was the Herald of Galactus?"Edit

In the tradition of epic mythology, we peer into a universe where the unthinkable has happened: THOR has been transformed into the Herald of GALACTUS. How can Earth survive with such a powerful harbinger of doom at its doorstep? Is there anyone who can stop him or will Earth be left a scorched and barren wasteland like so many other thriving planets before it?

Retrieved from "https://heykidscomics.fandom.com/wiki/What_If:_Thor_Vol_1_1?oldid=1472700"
Community content is available under CC-BY-SA unless otherwise noted.