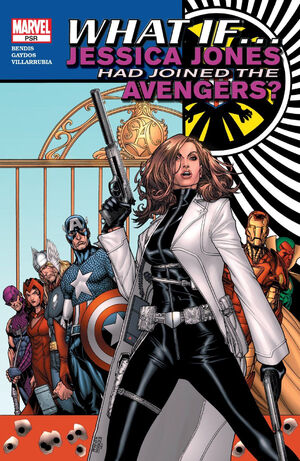 What If Jessica Jones Had Joined the Avengers? Vol 1 #1
February, 2005

Publisher
Marvel Comics
Previous Issue
Next Issue
What If? Vol 2 #114
What If Magneto Had Formed the X-Men With Professor X?

Appearing in "Jessica Jones Had Joined The Avengers"Edit

Ripped from the pages of the Avengers and fan-favorite ALIAS Jessica Jones, ex-superhero private eye was once tapped to join the Avengers, but chose not to and gave up being a super-hero altogether. But what if she had taken the job? The events that followed shake up both the Avengers and Jessica's life in ways no one could have guessed. Could Jessica have saved the Avengers from the disasters of Disassembled? For the first time ever Avengers' writer Brian Bendis reunites with ALIAS artist Michel Gaydos, with a special cover by Avengers artist David Finch.

Retrieved from "https://heykidscomics.fandom.com/wiki/What_If_Jessica_Jones_Had_Joined_the_Avengers%3F_Vol_1_1?oldid=1472694"
Community content is available under CC-BY-SA unless otherwise noted.