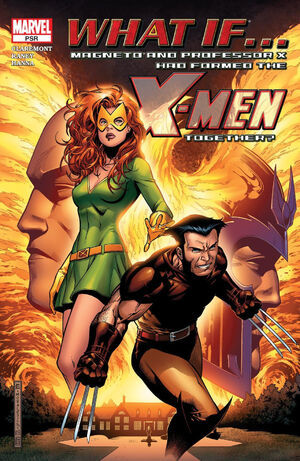 Publisher
Marvel Comics
Previous Issue
Next Issue
What If Jessica Jones Had Joined the Avengers?
What If Karen Page Had Lived?

X-Men legend Chris Claremont joins with the hot-shot artistic team of Cully Hamner (inside) and Jim Cheung (outside) to ask a question that MUST be answered only with speculation. Imagine a world where the Master of Magnetism had chosen a different path. Or perhaps he could have swayed Xavier from his own beliefs? These two legends stalk the halls of X-Men Canon, and at last the question is asked, "What if things had been different?"

Retrieved from "https://heykidscomics.fandom.com/wiki/What_If_Magneto_Had_Formed_the_X-Men_With_Professor_X%3F_Vol_1_1?oldid=1472696"
Community content is available under CC-BY-SA unless otherwise noted.