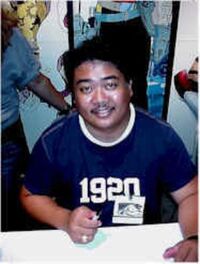 Whilce Portacio is an American comic book artist originally from the Philippines. Portacio started out as an inker at Marvel Comics in 1985. Over time, he was given assignments as a penciller as well. Portacio became noted for his work on such titles as The Punisher, X-Factor, and the Uncanny X-Men. However, in 1992, Portacio left Marvel to co-found Image Comics with six other high-profile artists. But, Portacio quickly withdrew from his partnership in this enterprise due to his sister's bout with lupus, eventually publishing his title Wetworks through Jim Lee's Wildstorm imprint. Other notable series that Portacio has worked on include Stone and Marvel's controversial Heroes Reborn storyline within Iron Man.

As of 2006, Portacio is returning to his artistic duties at Wildstorm on Wetworks vol.2, which is being written by Mike Carey.

Retrieved from "https://heykidscomics.fandom.com/wiki/Whilce_Portacio?oldid=143437"
Community content is available under CC-BY-SA unless otherwise noted.