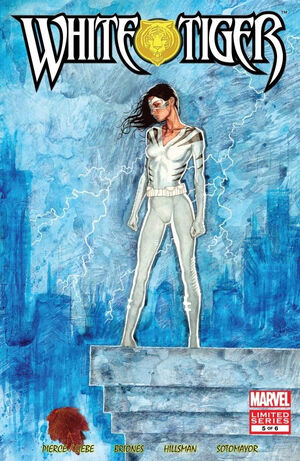 If you're not Black Cat, then I'm done. But first -- The Olsen Twins: Good? Evil? Or part of the elaborate C.I.A. plot?

Angela has a dream where she is in her room speaking with her late cousin, Hector. Hector tells her that he is proud of her and is always watching out. Angela awakens to the sound of Daredevil shouting at her. She is on the roof of a building and Daredevil reveals that she has been missing for three days. Further, Angela's body appears to be partially camouflaged. As she gets up, her full body comes into view. Angrily, she tells Daredevil that she knows he is actually Danny Rand. Danny finally confesses that he has been doubling as Daredevil over the past several weeks.

Danny brings Angela back to her apartment where she rests up. He tells her that smoothed things over with her employers at 212 Security. Angela receives a voicemail message from Jamie Guererro asking her to come in.

Not only are they not upset with her for her absence, but they offer to bring her on board full-time. Luke Cage and Danny are present at the meeting at 212. Guererro knows that Angela was injured from King Cobra's venom attack in their last encounter. Angela is angry because Danny all but revealed her double identity to Jamie and Niki.

Later, Angela changes into her costume and begins staking out Sano Orii, King Cobra and their Chaeyi contacts. Her investigation is interupted by the untimely arrival of Deadpool. Deadpool is on a mission to capture the Black Cat and mistakes Angela for his target. Angela corrects him citing the fact that she wears white as a clear indicator that she is not the Black Cat. Deadpool makes a few quips and takes off into the night.

Angela returns to her apartment only to find Yakuza Oyabun, Kenzo Orii waiting for her. Kenzo asks Angela what it will take to get her to leave his son alone. She replies that there is nothing that can bring her dead partner back to life, and there is nothing that will stop her from bringing Sano Orii down.

A few days later, Sano Orii accosts Angela at the park. He holds a gun to her and demands to know what his father said to her. Angela responds with a quip, and Sano fires at her. She blocks the first shot with her handbag, then dives into a nearby lake. Unfortunately, the lake is also occupied by the super-villain known as the Lizard.

Retrieved from "https://heykidscomics.fandom.com/wiki/White_Tiger_Vol_1_5?oldid=1516364"
Community content is available under CC-BY-SA unless otherwise noted.