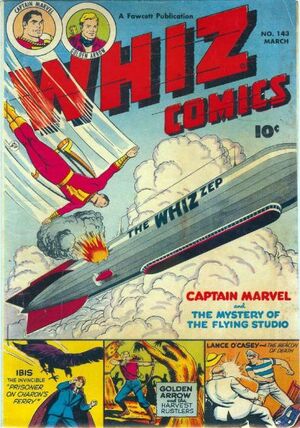 Appearing in "The Mystery of the Flying Studio"Edit

Synopsis for "The Mystery of the Flying Studio"Edit

Synopsis for "The Mystery of the Flying Studio"Edit

Prince Ibis gives a lecture on black magic, showing a book on it called the Necrominon. An audience member John Larko decides to get the book. As Ibis and Taia return from the lecture hall John knocks Ibis unconsciousness. He swiftly overpowers Princess Taia, tying her to a chair and gagging her. Ibis recovers and seizes the Ibistick, but Larko uses his magic to make him disappear, upsetting Taia. Ibis finds himself on a boat being steered by Charon and says he must turn back as there has been a mistake, however Charon says once the Ferry starts across the River Styx it must complete the journey. Ibis punches Charon then uses the Ibistick to bind Charon in chains and make the Ferry turn back. Ibis sees the city and asks the Ibistick to carry him to it, though Charon says he must deliver a human cargo. Ibis finds from a paper that John Larko is about to marry Princess Taia. Ibis finds from the paper almost 3 weeks have passed since he left though it seemed like a few hours on Charon's Ferry. Ibis says black magic must have been used to enslave Taia, Ibis gets to the Wedding just before Taia finishes her vows. Larko uses the Necrominon to summon the Vulture that destroyed Prometheus, however Ibis gets an idea from Prometheus bringing fire to mankind and uses the Ibistick to destroy the Vulture with fire. Larko threatens to cast a spell of death over the city but Ibis uses the Ibistick to snatch the Necrominon from his hands, however this causes Larko to fall from the roof. Charon appears and says Larko belongs to him now. Ibis says he's ready to go now but Charon says he is useful on Earth and Larko will be the cargo he delivers to the Land of the Dead. Later Taia is returned to normalcy she says Ibis saved the world from a terrible evil and Ibis says Charon thought so to or he'd be a Prisoner on Charon's Ferry.

Retrieved from "https://heykidscomics.fandom.com/wiki/Whiz_Comics_Vol_1_143?oldid=1473647"
Community content is available under CC-BY-SA unless otherwise noted.