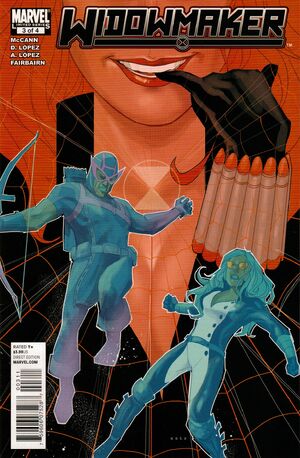 Black Widow Hawkeye Mockingbird Ronin = All-out espionage excitement! Across the globe and separated, Natasha, Clint and Bobbi are targeted by the deadly Ronin…whose true face has been revealed! What is this mystery man or woman’s endgame? What startling new place will it take our heroes? And which hero will be completely rocked by the shocking end?

Retrieved from "https://heykidscomics.fandom.com/wiki/Widowmaker_Vol_1_3?oldid=1652917"
Community content is available under CC-BY-SA unless otherwise noted.