StormWatch tries to bring the WildC.A.T.s under control by force. This does not work well. 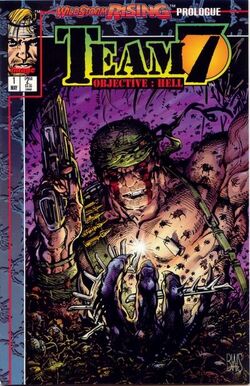 StormWatch tries to bring the WildC.A.T.s under control by force. This does not work well.

Meanwhile, Lord Defile decided that he wanted control of the starship which bought the Daemonites to Earth. Afte some research, he discovers that someone in Team 7 has the keys he seeks. Using various villains as proxies and pawns, he sets out to get the keys by a process of elimination.

By the end of the story, it has become apparent that the targetted spaceship is actually the Kherubim vessel and not the Daemonite one. Most of the WildC.A.T.s go missing in what looks like an explosion but is actually a warpjump.

Retrieved from "https://heykidscomics.fandom.com/wiki/WildStorm_Rising?oldid=531174"
Community content is available under CC-BY-SA unless otherwise noted.