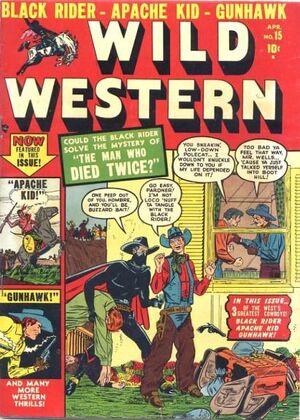 Appearing in "The Man Who Died Twice!"Edit

Synopsis for "The Man Who Died Twice!"Edit

In the town of Aspen Creek, a stagecoach is robbed by Lip Borger and his gang. The locals are left wondering why the marhsall does not act, unaware that Lip Borger and his men have threatened his wife. In order to cover this up, the marshal feigns having appendicitis However, the marshall is believed to have been double crossed when he learns that three of the locals have been killed.

However, as the gang makes off with the stagecoach and it's $30,000 gold shipment, the Black Rider comes by and tries to stop them. Fearful of the Black Rider, the gang members riding the coach end up crashing it. Lip and the other gang members leave their cashed friends to fend for themselves. The Black Rider forces the surviving gang members to help him ride the coach back to town and learns of Borger's involvement. In town, the Black Rider learns about the wounded and the marshal's "appendicitis" and leaves to "get" a doctor. The Rider soon returns in his alter-ego, travelling doctor Matthew Masters.

When examining the marshal, he finds that he has been faking his illness, but keeps it to himself when he finds that the marshal resembles an outlaw named Cut Wells, a man who was supposedly killed by Comanches two years prior. When Masters mentions this, the marshall dismisses it. He also notes that the marshal's wife is blind and one of Borger's wounded men seems to know have some kind of secret. Deciding to investigate further, Matthew Masters sends a telegram out to sheriff Yates in Abilene, Texas asking to confirm the death of Cut Wells. Two hours later he gets a response, confirming the various identifying scars and the fact that Cut Wells was not killed as originally reported.

Realizing the marshal is really Cut Wells, Masters changes back into the Black Rider and goes to confront him. He finds Cut arguing with one of Borger's men over the people who were killed in the raid, something that Lip promised would not happen. When the argument turns into a fight, the Black Rider bursts in but the outlaw escapes. Black Rider demands to know what is going on and the marshal admits that he is really Cut Wells and explains his story:

He explains that three years ago, he had retired from being an outlaw. However, money got tight and Cut had to think about his wife. He agreed to work with Lip Borger on a bank robbery on the condition that they did not kill anybody. However, Lip shot one of the bank tellers and after they escaped Cut was beat up for protesting it. Cut faked his death and relocated to Aspen Creek and tried to redeem himself by becoming the marshal. However, Lip Borger and his men soon found him and threatened to reveal his criminal past and threatened his wife if he did not allow them to rob the coach.

While riding through Sweetgrass Valley, the Apache Kid is attacked by a pair of white men, leaving him to wonder why the two men are on Apache land. He rides back to his tribe and informs Red Hawk of what he has seen. Red Hawk fears that this might lead to white men forcing the Apache people out of the valley, which Red Hawk does not wish to do as they have security and unlimited resources in the area.

Meanwhile, back in Sweetgrass Valley, the two men are lawyer Marcus Bascomb and his assistant Snap have discovered gold in the area. Determined to stake a claim of the land, Bascomb rides back into town and scans the law books to find some legal means of possessing the land and taking it away from the Apaches. According to the law, Native Americans are considered wards of the American government and cannot claim ownership of land, giving Bascomb the legal means to claim his stake on Sweetgrass Valley and force the Apaches off the land. He decides to get the local ranchers, currently stricken by drought, to assist in driving out the Apaches by telling them of the lush grass and water in Sweetgrass Valley.

Apache Kid arrives in town just as Marcus is riling up the ranchers. Apache Kid tires to convince them that the land is owned by the Apaches, but Bascomb informs him of the law and their eligibility to claim a stake on it. When Marcus orders Snap to eliminate Apache Kid, the Kid realizes he cannot fight back less he be swarmed by the ranchers and stands his ground. Miraculously, all of Snap's shots miss and the Kid knocks him out. Apache Kid then flees town under a hail of bullets.

The Apache Kid comes up with a solution to the problem. First he changes into his alter-ego of roving cowboy Aloysius Kare. Then he pays a visit to the claims office and threatens the claims agent at gunpoint and forces him to sign over the land claim to Kare. Changing back into Apache Kid, Kare then follows after Bascomb and his men, learning that Bascomb has also contacted the army at Fort Benning to get needed backup to force the Apaches off the land. The Apache Kid rides back to his people and warns them of what is going on. The Apaches then confront Bascomb and his party and refuse to allow them on the land. When Snap tries to shoot the Apache Kid, the Kid kills him with a throwing knife and they force Bascomb and his posse back.

With the military approaching, Apache Kid falls back and changes back into Aloysius Kare and when the army arrives, Kare presents his claim papers on the land and tells the captain that he has given the land to the Apache. Furious at this double cross, Marcus tries to pull a gun on Kare, but before he can shoot the Apaches kill him with arrows.

In the aftermath of the battle, Apache Kid searches Sweetgrass Valley to find out why Bascomb was so interested in the land, finding a pickax and the gold. Reporting it to Red Hawk, they both agree to keep the discovery of gold a secret to avoid others coming to seek it out of greed.

When his father John is murdered by outlaw Jeb Morley, his son Preston Hardwick comes back from studying law out east to attend his father's funeral. Meeting with the local doctor he learns about how his father was gunned down by by Morley. The return home reminds Preston how his father had taught him to ride and shoot, but raised him to never kill other men with his guns, for fear of tarnishing the family name. However, Hardwick is determined to avenge his fathers death, and so he finds a way around his family vow: Changing his name to Red Larabee, Hardwick is determined to get revenge against the man who killed his father.

The newly christened Red Larabee then rides into Duro County where Morley has been hiding out since killing John Hardwick. He beats up Morley's gang until Morley gets the drop on him. The two agree to do a draw. Handing their guns over to Morley's gang, two guns are placed on either side of the room. Both men are to walk over to their guns and pick up the guns, the faster draw would win by shooting the other man. Red agrees to the challenge, however as they are waking to the guns, Morley is tossed another gun by his men and he takes shot at Red before he can reach his gun. However, Red somehow survives, and manage to reach his gun.

When Doc runs in to try and stop Red, he reveals that he was wearing a bullet proof vest that his father made him wear whenever he practiced using his guns, knowing that this was the same way that Morley killed his father. When Morley tries to shoot Larabee while he is distracted Red manages to get the faster draw and shoots him dead. With his fathers death avenged, Red rides off onto the range... And so the legendary Gunhawk was born.

This issue sees the addition of Apache Kid and Gunhawk as regular features in the title.

Retrieved from "https://heykidscomics.fandom.com/wiki/Wild_Western_Vol_1_15?oldid=1472900"
Community content is available under CC-BY-SA unless otherwise noted.