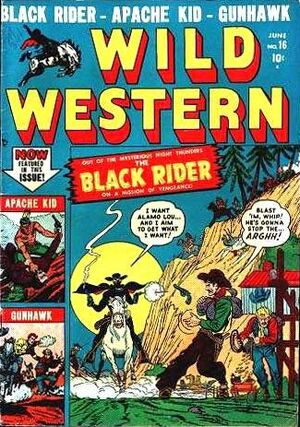 Appearing in "The Texas Tigress"Edit

Synopsis for "The Texas Tigress"Edit

Alamo Lou and her gang are plotting to rob a train, as they prepare Whip, one of Lou's men, asks her to marry him after they cross the border. Lou refuses his advancements telling him that she would marry a coward like Whip and cuts his hand with a knife. This rejection, Lou became quite upset. They block the tracks with logs causing the train to derail.

Among the passengers disrupted in the crash are frontier doctor Matthew Masters. Whip demands that Masters comes along to treat his hand and takes him and the other passengers prisoner to hold them hostage. When Whip and Lou leave to make their ransom demands, Masters takes this as an opportunity to escape. Hearing how the guards are hoping for liquor, Matthew tells them that he knows where to find some good whiskey and they allow him out to go and get them son.

When aware from the ranch where they are being held, Masters changes into the Black Rider and returns to the camp and guns down the outlaws and frees the other prisoners. He sends them off to town while he goes to deal with Whip and Alamo Lou. He catches up with Lou and Whip while they are collecting their ransom and attacks with guns blazing. Lou is wounded by a gunshot and pretends to faint. Black Rider gets concerned and goes to check on her, but she gets the drop on him and knocks the hero out.

They take Black Rider prisoner because Lou has become smitten of him. However a rainstorm forces them seek refuge at a nearby ranch, which they take over easily. Once inside, they tie the Black Rider to a chair. Because of Whip's jealousy, Lou forces him to wait outside. While Lou is upstairs looking for a change of clothing, Whip comes in and tries to unmask the Black Rider, but he fights back. Before Whip can strike the Rider with his whip, Lou comes downstairs and shoots it out of his hand. She then tries to romance the Black Rider and asks for a kiss. When the Black Rider refuses, she orders Whip to bring in the man who owns the ranch and orders him shot dead.

Lou then tells the Black Rider if he does not kiss her she will have every prisoner on the ranch killed. When Whip hears this, he gets so enraged he shoots Lou in the back. Whip and his men then go outside to kill everyone else, saving the Black Rider for last. While they are gone, Lou uses the last of her strength to free the Black Rider. The hero gets the drop on Whip and his men and shoot them dead. Going back to Lou, she asks him to kiss her as her dying wish. Because she showed a moment of heroism, Black Rider kisses her and Lou dies happy.

At the village of the Apaches, White Swan laments to her grandfather Red Hawk how she seeks the love of Apache Kid. Unaware that the Apache Kid is listening in, Red Hawk tells her that she must wait for him to speak, but White Swan swears to do whatever it takes to win the Apache Kid's heart. Realizing that White Swan is up to something, the Apache Kid decides to watch her in secret.

White Swan locates a group of outlaws out on the range and asks them to pretend to kidnap her in order to make the Apache Kid rescue her and hopefully announce his love of her. The men are reluctant, but speaking in private they see this as a means of eliminating the Apache Kid. They send one of their men to deliver the ransom message to Apache Kid. However, along the way, Apache Kid slips away and changes into his alter-ego of Aloysius Kare to foil White Swan's ambitions. After changing into his other identity, Kare sends his escort on a wild chase for the Apache Kid and continues on to where White Swan is being kept prisoner.

Seeing White Swan's situation, Kare attacks the outlaws that have her prisoner despite White Swan's protests to leave the situation alone. Afterward, Kare frees White Swan resigns to let Kare rescue him in the hopes that someday Apache Kid might finally express his love to her.

Appearing in "Nugget of Death!"Edit

Synopsis for "Nugget of Death!"Edit

While riding through Texas, the Gunhawk spots some vultures circling in the sky and decides to see what they are stalking. He finds the body of a murdered sheriff. He searches the man and finds a bank book for the Burro Flats bank with a large nugget of gold attached to it. Gunhawk decides to investigate the murder and along the way to Burro Flats someone tries to shoot him but misses.

When he gets into town, he talks to the editor of the local paper and learns that the sheriff had hinted in on something big with two other locals who have also gone missing. Gunhawk decides to check in on the local banker, Bailey. When he questions Bailey, he tells him that he has no idea what business the three missing men were up to. When Gunhawk leaves empty handed and is bushwacked once again, but he kills the man shooting at him.

Suspecting that something is going on, Gunhawk gathers the newspaper editor and they go back to the sheriff's body. There, Gunhawk decides to investigate the waterfall where he was shot at earlier. Behind the waterfall he finds a cave where there is a cache of treasure hidden inside. Also there is Baley and his men who killed the three men, who discovered the treasure with him and were all standing to take a cut. Bailey killed them to take all the gold for himself. Gunhawk gets the drop on Bailey and his men and guns them all down.

In the aftermath, he tells the newspaper man to not report about the cache of trouble, explaining that once the general public knew about it there would be untold bloodshed and murder by those greedy enough to try and claim it all for themselves.

Retrieved from "https://heykidscomics.fandom.com/wiki/Wild_Western_Vol_1_16?oldid=1472901"
Community content is available under CC-BY-SA unless otherwise noted.