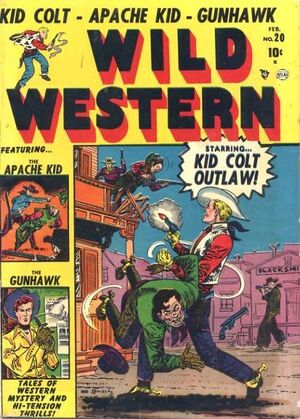 Appearing in "The Guns of an Outlaw!"Edit

Synopsis for "The Guns of an Outlaw!"Edit

Kid Colt is on his way to the town of Goliad, a town where he is not treated like an outlaw. However, when he arrives in town he finds that the people are acting strangely and ignore him. He runs into his old friend Ramblin' Joe who tells the Kid that the sheriff Bill Yancy was bushwaked by unknown attackers and killed. A few days later, an outlaw named Lloyd Bohan and his gang came to town and took over. The townsfolk were unable to stop Bohan and his men because they used legal means to take over and have eliminated anyone who has protested.

Kid Colt looks around the town and confirms what he has heard. Hitching his horse outside the sheriffs office some of Yancy's men come out and order him to untie his horse. This leads to a fight which ends when Kid Colt guns the men down. This draws out Bill Yancy and the rest of his men. Kid Colt then announces out loud that he knows that Bill was once sent to prison for robbery and murder. Before Bill and his men can gun down Kid Colt, the local marshal arrives and gets the drop on the men and orders Kid Colt to accompany him.

The marshall introduces himself as Luke Masters and introduces Kid Colt to his son Jamie, telling the outlaw that he and his family believe Kid Colt to be a hero. The Kid thanks Masters for getting him out of the thick of things and rides out of town. Meanwhile, Bill Yancy and his men hatch a plan to deal with Masters and Yancy asks for the US marshall to meet with him. As they walk to meet with Yancy they see a man come out of an alley aiming to shoot Kid Colt in the back before he can leave town. Luke warns Kid Colt and the Kid guns the man down, and seemingly shoots Jamie as well. As Luke carries his son away, Kid Colt is horrified by what it appears he has done. When Bill Yancy comes up to arrest him, Kid Colt surrenders peacefully, turning over his guns and vowing never to shoot them again.

However later when locked up in the city jail, Kid Colt is left to wonder how Jaime got shot if the outlaw was standing right in front of the boy and took all the bullets. Later that night Luke Masters comes to his bars. He tells Kid Colt that the doctor pulled the bullet out of his son and it was a .44 caliber bullet, not a .45 like the Kid shoots. Kid Colt realizes he has been framed, and Luke uses a hacksaw to cut through the bars and free the framed outlaw.

Both the Kid and Luke then go to the local saloon and the two men gun down Bill Yancy and his gang, catching them off guard. With the crooked lawmakers dead, Luke hopes the town can return to normal and bids Kid Colt farewell.

Appearing in "Battle Cry of the Apache Kid!"Edit

Synopsis for "Battle Cry of the Apache Kid!"Edit

After taking out some outlaws as the Apache Kid, Aloysius Kare takes some time to relax by playing a game of cards in the local saloon. Gambling with a stranger from out of town, Kare points out that the man is cheating. The man attempts to draw on Aloyisus, but Kare is a faster draw and shoots him dead in self defense. However, a local named Miner tries to stir people up by convincing them that Kare shot the man in cold blood. When a lynch mob attempts to apprehend Aloysius, he manages to escape by jumping out the saloon window and riding away. As he does so, Miner vows to get the sheriff to brand Aloysius an outlaw. Convinced that someone is trying to frame him, Aloysius Kare changes into his alter-ego of the Apache Kid to try and clear his name.

Meanwhile, back in own, Miner gloats to his men about how easily he framed Aloysius, one of his major opponents in his plans to open a gambling house in town. As the posse rides out to look for Kare, the Apache Kid decides that Miner bares closer examination. The sheriff and his men meet with Captain Bill Gregory at Fort Madison and inform him that Aloysius Kare is wanted dead or alive, Bill insists on tagging along to insure that his friend gets a fair trial instead of being lynched without due process. While at the Apache village, Red Hawk expresses to White Swan that he is concerned about his son, the Apache Kid and mobilizes his warriors to ride out and seek out the Kid and offer him assistance.

Appearing in "Red Larabee, the Gunhawk"Edit

Synopsis for "Red Larabee, the Gunhawk"Edit

Riding along the Rio Grande, Gunhawk spots some easterners who have been attacked. Checking their bodies, he finds that one of the men is still alive, but fading fast. The dying man tells Red that they are part of the Jamison Party sent into Mexico by Eastern University to obtain the Golden Key of Quapultec. He explains that they were attacked by Aztecs who did not wish the key to be taken. As the man dies, the Gunhawk decides to travel into Mexico and get the key back.

He rides into the town of San Ecaudor and begins asking the locals what they know about the Golden Key, but nobody can answer his questions. As Red rides out of town he is unaware that some of the men have been talking are frightened by what he said. As he rides to the town of Ciudad Miguel, some Mexicans try to bushwack Red, but his guns blaze faster and he manages to ride to safety. In town he questions the local captain of the Federales who tells him that the men from Eastern University had permission to search for the Golden Key from the Mexican government. He tells the Gunhawk that the legends say the Golden Key can unlock the hidden treasure of Quapultec and that the Quapultec people are believed to have lived in the mountain village of Teocalca, but nobody who has ever gone searching for it has returned alive to confirm it's existence.

Gunhawk ignores the warnings and thanks the man for his help and rides off toward the mountains. There he is attacked by a pair of Aztec warriors, one he guns down and the other he forces into showing him the path to Toecalca. When the warrior does as he is forced to do, he commits suicide by jumping off a nearby cliff into the lava flows that surround the area. As Gunhawk stands shocked by this, another warrior knocks him out from behind. When Red wakes up he finds himself in the temple of the worshipers of Quapultec and that they have tied him to their idol and intend to sacrifice him in the lava. However before the priest can sacrifice Red, there is a massive earthquake. As the worshipers panic, the Gunhawk breaks free. Seeing the key he grabs it and rushes out as their cavern temple collapses killing everyone inside. Having gotten to safety, the Gunhawk decides that the key is not worth the trouble and tosses it into the lava below.

Retrieved from "https://heykidscomics.fandom.com/wiki/Wild_Western_Vol_1_20?oldid=1472905"
Community content is available under CC-BY-SA unless otherwise noted.