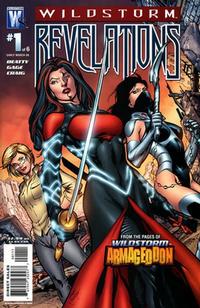 Appearing in "The Coming Storm"Edit

Synopsis for "The Coming Storm"Edit

The story begins with Savant and Backlash (Jodi Morinaka Slayton) relaxing in bathtubs after having infiltrated Stormwatch Plaza and deleted all of Stormwatch's computer files. Their peace is interrupted by Nemesis, who managed to hack her way in Savant's teleport matrix, defeated the two and tied them up in Coda--spun bladewire. Nemesis explained to Savant and Blacklash that she was able to hack the teleport matrix because of a future Backlash, and that she need their help in preventing the apocalypse: from her time in the future due to being teleported by the Void, Nemesis witnessed a ravaged Earth and it's shattered moon, where mankind is "knocked down the food chain", and the age of heroes is almost finished. After hearing this, both Savant and Backlash, incredulously, laughs of Nemesis' accounts. However, Nemesis convinces Backlash to believe her because Backlash's future self provided Nemesis with a word to her past self: "Kameko". Nemesis release Savant and Backlash, with the former questions Nemesis as to how the world is going to end. Nemesis replied that it is either post-humans, conspiring "plain" humans, or both that inadvertently cause the cataclysm. But she believes that they need more information from starting "at the top and work [their] way down".

At Denver International Airport, Backlash disguise herself as a terrorist follower of Kaizen Gamorra and alerts to the media of planting a live (fake) bomb (in the form of a monkey-theme backpack) in the airport. In the Bleed, the Authority see the news and rush to the scene. After they left, Nemesis, Savant and Backlash infiltrated the Carrier to hack the shiftship's database. Nemesis reasons with Savant that they can't trust the Authority for asking them for their help, and believes that they could have been responsible for the apocalypse. As Savant and Backlash hurry to the Carrier's database, Nemesis warns them of the returning Authority, who are covered in green goo and are angry.

Retrieved from "https://heykidscomics.fandom.com/wiki/Wildstorm:_Revelations_Vol_1_1?oldid=1567818"
Community content is available under CC-BY-SA unless otherwise noted.