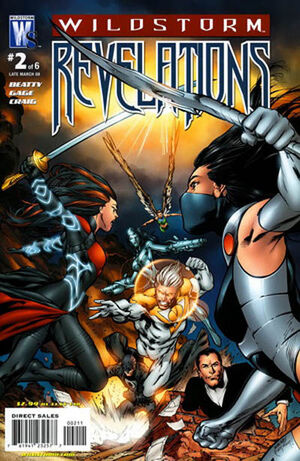 Not words, just a cascade of overwhelming emotions coursing through her systems... She's mostly sad... so very sad...

To buy Savant more time, Nemesis telepathically tells The Carrier about the future she saw. This causes The Carrier to cut itself off from The Authority and their ability to summon doors. Jodi takes on Swift and keeps her occupied. Barely able to fend off The Midnighter, Nemesis finally uses her sword to cut a hole in the wall of The Carrier. As The Authority scramble to fix what Nemesis did, she's teleported away by Savant who successfully downloaded the information they needed. With the girls gone, The Authority members are dumbfounded as to how the trio got in and out. The Engineer tries to communicate with The Carrier but cannot and describes the ship as being 'sad'.

Afterward, Nemesis pays Majestic a social call which is designed as a distraction so Savant can raid his databases in Mount Rush More as well. Majesitc reveals he allowed it only because Nemesis is involved. The next stop for the girls is the small town of Tranquility.

Retrieved from "https://heykidscomics.fandom.com/wiki/Wildstorm:_Revelations_Vol_1_2?oldid=1567817"
Community content is available under CC-BY-SA unless otherwise noted.