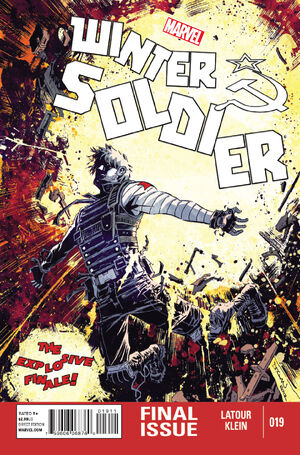 Appearing in "It Ends With a Kiss"Edit

• High above Earth, the ELECTRIC GHOST has set a plan in motion that tears at the very fabric of reality. As the universe threatens to unravel, only THE WINTER SOLDIER can stop it – But does he even want to? • Writer Jason Latour (Loose Ends, Wolverine) and artist Nic Klein (Dancer, Viking, Doc Savage) bring you the fiery conclusion to THE WINTER SOLDIER’S latest deadly mission!

Retrieved from "https://heykidscomics.fandom.com/wiki/Winter_Soldier_Vol_1_19?oldid=1657731"
Community content is available under CC-BY-SA unless otherwise noted.