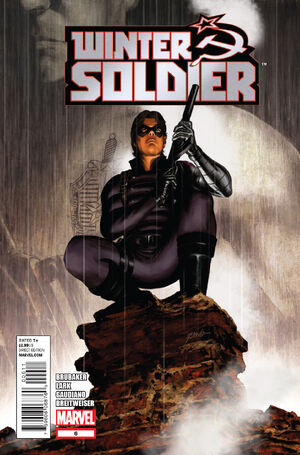 • Ed Brubaker is reunited with famed artist Michael Lark (DAREDEVIL) who joins for the Winter Soldier’s second arc “Broken Arrow” with original Winter Soldier artist Steve Epting taking the reins on covers! • Winter Soldier finds himself on a twisted trail from coast to coast and past to present... • ...chasing the insane man who will become his worst enemy. • And an inciting incident you won’t forget!

Retrieved from "https://heykidscomics.fandom.com/wiki/Winter_Soldier_Vol_1_6?oldid=1640734"
Community content is available under CC-BY-SA unless otherwise noted.