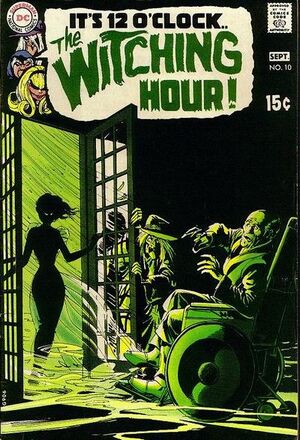 Appearing in "A Warp in Time... Loses Everything!"Edit

Synopsis for "A Warp in Time... Loses Everything!"Edit

A psychologist has a man committed as he claims to have been stuck in a time warp, then he finds himself passing through a time warp and eventually escapes, only to be committed to an asylum as mad by another psychologist.

A callous man who treats young women like dirt falls in love with a strange girl he first sees upon a sea cliff and then briefly on occasion until he confronts her once more upon the sea cliff when she backs away from him and over the side. As the man ages he never falls in love again and he never forgets her, spending his days as an old man waiting in a wheelchair on top of the sea cliff. One day he fails to show up for supper at the old folk's home and when they go to the sea cliff where they know he spends his time, his wheelchair is empty and there is no sign of a body on the rocks down below.

Retrieved from "https://heykidscomics.fandom.com/wiki/Witching_Hour_Vol_1_10?oldid=1467978"
Community content is available under CC-BY-SA unless otherwise noted.