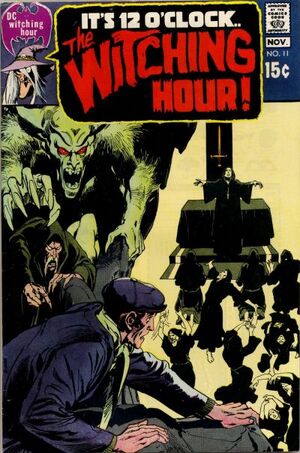 Appearing in "The Mark of the Witch"Edit

Synopsis for "The Mark of the Witch"Edit

A man locked in a madhouse hopes that the new doctor will believe his story about a coven of witches slaying a young girl as a Satanic sacrifice and blaming him for it, but the doctor is a member of the coven as well and merely tells his fellows that the madman will need to remain locked up for life.

Appearing in "The Sands of Time, the Snows of Death!"Edit

Synopsis for "The Sands of Time, the Snows of Death!"Edit

A man lost in the Arctic who has murdered his three associates for gold comes across a cave. Inside the cave he finds a skeleton with a sack of gold. Further back in the cave he finds strange markings on the wall and a warning away from the inset door. Behind the door he finds a time machine. He uses the time machine to escape the cold by traveling into the distant past, but he forgot about giant dinosaurs, so he flees back to the cave when they pursue him. Inside he attempts to return to the present but the door is stuck, so he carves a warning for his future self and seeks food outside the cave where he lives and eventually dies. Many years later, the man enters the cave and sees the skeleton and crumbling gold sack unaware that he is looking at his own body.

Retrieved from "https://heykidscomics.fandom.com/wiki/Witching_Hour_Vol_1_11?oldid=1467980"
Community content is available under CC-BY-SA unless otherwise noted.