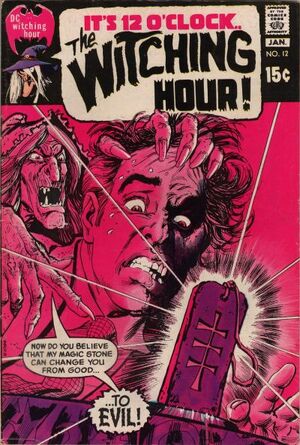 A boy acquires a talisman which he believes that his stepmother has thrown out. Years later he hopes to track it down in order to use it for good, but after winning a mystic duel with a witch who turns out to be his stepmother, he realizes that she kept it all these years and that its power was responsible for corrupting her to evil.

An actor shoots a blackmailer but the killing unhinges him and he imagines a director ordering him about the crime scene until the police show up to arrest him.

A young woman joins a yoga class where, unknown to her, the instructor is a Satanist. He teaches her to see the normally unseen forces of good and evil struggling her possession of her soul and this frightens her to the point of wishing to discontinue her studies. He gives her a charm in order to dissuade her from quitting, telling her that it will ward away evil spirits. What she doesn't know is that the charm is supposed to ward away good spirits. When the evil creatures that only she can see accost her, she accidentally drops the charm down a grate. She goes to the yoga instructor in order to procure a stronger charm, but the Satanist assumes that she has been possessed and invites her to join their black mass. When he sees that she is upset and confused, he realizes that her soul has not yet been claimed for evil and has his demons pursue her. She breaks the glass of a department store window in order to seize a cross to ward them off. She explains all this to police who tell her she will have to wait in a cell to see if the department store owner wishes to press charges. They remove the cross from the hysterical woman as evidence and leave her terrified waiting in the cell for the demons to find her.

Retrieved from "https://heykidscomics.fandom.com/wiki/Witching_Hour_Vol_1_12?oldid=1467981"
Community content is available under CC-BY-SA unless otherwise noted.