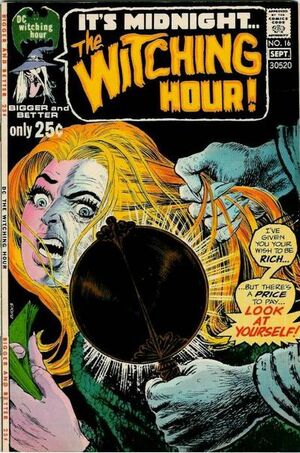 Appearing in "Never Kill a Witch!"Edit

Synopsis for "Never Kill a Witch!"Edit

Harry and Stella approach an old house that Harry believes has money hidden away inside but Stella is frightened as she has heard a witch lived there. Harry tries to reassure the frightened Stella that they can make money for their wedding by robbing the old woman who lives in the house, but Stella is still frightened. Harry and Stella are confronted by the old woman who lives in the house, accusing them of being thieves. Harry attacks the old woman and Stella thinks that he has killed her, but she appears again and warns them to leave her house. Harry makes sure the old woman is dead this time. Stella wants to leave, but Harry refuses to leave without the money and finds its hiding place. The witch refuses to stay dead and when Harry confronts her, a fire breaks out. Harry gets the burned Stella out of the house and asks a passerby to call an ambulance. The old woman burns up in the house and Harry and Stella are brought to the hospital where they have an extended stay. When the bandages from their faces are removed, Stella screams when she sees that Harry's face now resembles that of the old witch.

Appearing in "The Spell of Sinner Ella!"Edit

Synopsis for "The Spell of Sinner Ella!"Edit

The Cinderella story retold where Cinderella pushes one of the stepsisters off a cliff for attempting to rival the prince's affection and the prince tracks her down with the glass slipper and has her hung.

Appearing in "You Can't Hide From Death"Edit

Synopsis for "You Can't Hide From Death"Edit

One man fires a shot in a duel and misses and the other refuses to fire saying that he will pick the time and place. The story leads the reader to believe that the first man in the duel spends years fleeing the pursuit of the other, but the end of the story reveals that the pursued man is the one who refused to take the shot. At the end of the story, the pursuer catches up with the pursued and hands over his gun, demanding that he take the shot. The man fires into the ground.

Appearing in "The Wondrous Witch's Cauldron"Edit

Synopsis for "The Wondrous Witch's Cauldron"Edit

reprinted from House of Secrets Vol 1 58

Appearing in "The Curse of the Cat"Edit

Synopsis for "The Curse of the Cat"Edit

reprinted from House of Mystery Vol 1 177

Retrieved from "https://heykidscomics.fandom.com/wiki/Witching_Hour_Vol_1_16?oldid=1467989"
Community content is available under CC-BY-SA unless otherwise noted.