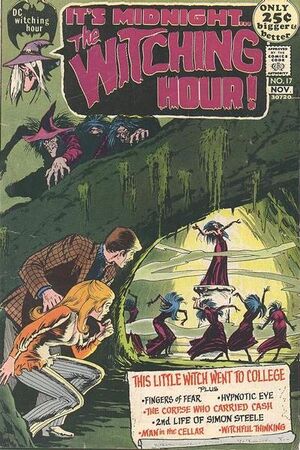 Appearing in "This Little Witch Went to College"Edit

Synopsis for "This Little Witch Went to College"Edit

When a college coed goes missing, the campus coven attempts to get a new initiate to frame a professor in regards to her disappearance.

Appearing in "The Corpse Who Carried Cash!"Edit

Synopsis for "The Corpse Who Carried Cash!"Edit

A funeral home employee embezzles from his boss and decides to hide the money in the casket of a recently dead person overnight. He realizes the error of his ways when his boss informs him the following morning that the man had been cremated.

Appearing in "The Man in the Cellar"Edit

Synopsis for "The Man in the Cellar"Edit

Miser Ephraim Dark meets a kind stranger through a mirror that he keeps in his cellar. The stranger pulls Ephraim through the mirror and offers him a meal but Ephraim can only think he's being spied on so the stranger can steal his money. When Ephraim notices a painting ajar, he knows that he's located the man's safe. He steals the money and flees back through the mirror, but he panics that they might be able to follow him through the mirror so he burns the money. Still not satisfied that he is safe, he breaks the mirror. When he checks his own money hiding place he is shocked to discover his money is gone. The face of the stranger appears and Ephraim realizes the stranger is himself living another life if he had not been a miser. Ephraim realizes that the money he stole and destroyed was his own.

Appearing in "Fingers of Fear!"Edit

Synopsis for "Fingers of Fear!"Edit

Appearing in "The Second Life of Simon Steele"Edit

Synopsis for "The Second Life of Simon Steele"Edit

reprinted from House of Secrets Vol 1 46

Retrieved from "https://heykidscomics.fandom.com/wiki/Witching_Hour_Vol_1_17?oldid=1467992"
Community content is available under CC-BY-SA unless otherwise noted.