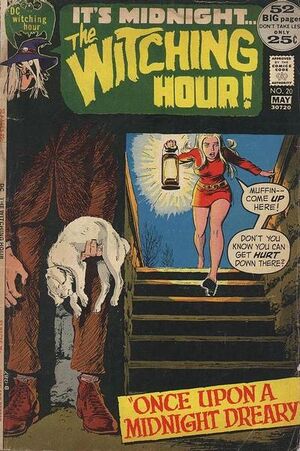 Appearing in "Death Is a Demon In Disguise"Edit

Synopsis for "Death Is a Demon In Disguise"Edit

A killer is thwarted when he dons a mask which resembles his victim's face in order to sneak by police only to find that the mask has assumed the features of his own face.

Appearing in "Never Ride With a Stranger!"Edit

Synopsis for "Never Ride With a Stranger!"Edit

A driver who has already picked up a hitcher picks up a lady who says she is looking for gas. A storm comes up so they stop at an old house. The woman seems apprehensive but the two men reassure her. At midnight, the men check on her in her room, but she claims to have been startled by a figure with the appearance of the Devil. The two men suspect one another and eventually a fight breaks out. The woman laughs and transforms herself into Satan, claiming their souls.

Appearing in "Once Upon a Midnight Dreary"Edit

Synopsis for "Once Upon a Midnight Dreary"Edit

A woman with a dog rents a summer home from a man the officials are unaware has murdered and buried his wife on the premises. When the man notices the dog get wise to his wife's grave, he resolves to shoot the dog and murder its owner as well. She falls down the basement stairs and breaks her leg so the man is in no hurry to kill her after he's shot the dog, and he goes outside to dig her grave. She uses the time to unravel the threads of her sweater to string them across the stairs. When the man returns she distracts him from noticing as she backs away and he tries to aim his gun at her. He falls down the stairs and breaks his neck.

Appearing in "Beware the 13th Guest"Edit

Synopsis for "Beware the 13th Guest"Edit

reprinted from House of Secrets Vol 1 59

Appearing in "The Diamond Hands of the Sun God!"Edit

Synopsis for "The Diamond Hands of the Sun God!"Edit

reprinted from House of Secrets Vol 1 8

Retrieved from "https://heykidscomics.fandom.com/wiki/Witching_Hour_Vol_1_20?oldid=1467997"
Community content is available under CC-BY-SA unless otherwise noted.