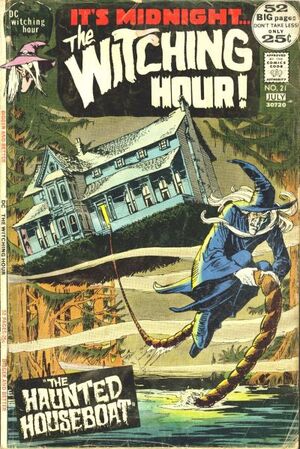 Appearing in "The Mournful Bells of Santa Morte"Edit

Synopsis for "The Mournful Bells of Santa Morte"Edit

Two American soldiers make their way back to Italy after the war is over to collect a chest of valuables they had discovered during the shelling of a monastery. One man kills the other to keep the full share of the loot and drags the chest out of the basement when he hears the tower bell ringing. He goes up to investigate and the monk who lives there alone finds the chest. He assumes that his visitors must have discovered its location and left it for him, so he goes to ring the bell in celebration. The bell strikes the murderer and knocks him out of the tower to his death.

Appearing in "Prisoner of Sorcerers' City"Edit

Synopsis for "Prisoner of Sorcerers' City"Edit

reprinted from House of Secrets Vol 1 42

The circus clown is attracted to the pretty highwire girl and she tells him that she thinks he must be handsome under that silly clown makeup and would go out with him but he doesn't ask her. The sword-swallower is jealous that she dates the other performers but not him so he cuts her wire. When she falls without a net the clown rushes to catch her. He breaks her fall but suffers fatal wounds in the process. After he succumbs she wants to remember his real face and is startled to learn his makeup doesn't come off and those were his actual features. She kisses the dead man and tells him that she will love how he looks forever.

Appearing in "The Haunted Houseboat"Edit

Synopsis for "The Haunted Houseboat"Edit

A paranormal investigator arrives in the village at midnight to examine a supposedly haunted house and is delighted to hear all sorts of strange noises emanating from it. The next day he is startled to discover the house gone and when he questions the locals all he gets is stonewalled. Closer examination reveals the house to have been uprooted and moved so he follows the tracks down to the dock where he is amazed to see the house has been converted to a houseboat. The locals knock him over the head and put him out to sea with the houseboat. When he revives and enters the house he meets a group of witches over 200 years old who tell him that the villagers, fearing their evil, had sealed them inside the house with a mystical substance. They surmise the villagers must have been afraid that the man would release them by entering the house, so they converted the dwelling into a houseboat and set them adrift. The man tries to escape, but quickly tires of swimming and the current brings him back to the witches. They put him to work as a servant.

Appearing in "Designs for Disaster"Edit

Synopsis for "Designs for Disaster"Edit

reprinted from House of Secrets Vol 1 19

Retrieved from "https://heykidscomics.fandom.com/wiki/Witching_Hour_Vol_1_21?oldid=1467999"
Community content is available under CC-BY-SA unless otherwise noted.