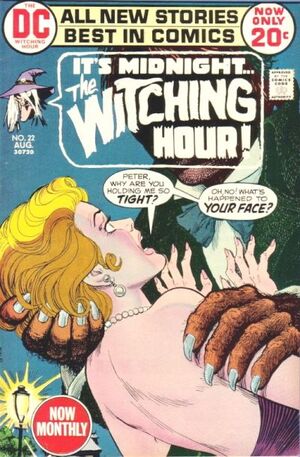 A wannabe writer takes up residence in a dead famous writer's room only to discover that the man in fact was a criminal. Over time he begins to assume the dead man's persona to the point of attacking his girl friend. A police officer intervenes and when the writer sends the dead man's dead to attack the officer, he trips over the hound and falls down the stairs. The blow he receives on the head releases him from the delusion that he was actually the dead writer returned to life.

Appearing in "The Haunted Hands of Guilt"Edit

Synopsis for "The Haunted Hands of Guilt"Edit

A pianist frames a gypsy rival for a killing and then gets in an auto accident which mangles his hands. He visits the gypsy in prison awaiting his execution and offers to send money to his family if he can have his hands. The condemned man agrees and the hands are transplanted onto the killer after the gypsy's death. Unfortunately during his first concert performance the pianist learns the gypsy was a werewolf.

A Nazi war criminal is captured by survivors of the death camp and they bring him back to the camp to force him to experience life as they had lived it. He tries to escape but they catch him until he thinks of hiding in the crematorium. His captors think that he has escaped them so they burn the evidence of their revisit to the camp, unaware that the ashes drifting down also consist of their tormenter.

Retrieved from "https://heykidscomics.fandom.com/wiki/Witching_Hour_Vol_1_22?oldid=1468000"
Community content is available under CC-BY-SA unless otherwise noted.