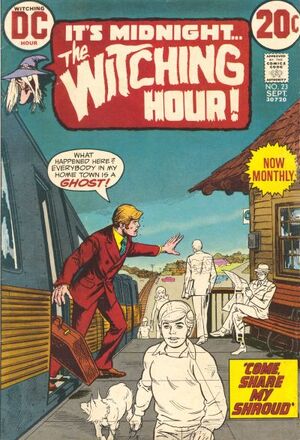 Appearing in "Watch Over My Grave!"Edit

Synopsis for "Watch Over My Grave!"Edit

A coven sets its sights on a man's daughter to make her into a witch so they lure him away from her presence with the pretense of a job as a night watchman.

Appearing in "Death Pulls The Strings"Edit

Synopsis for "Death Pulls The Strings"Edit

A convict feels that the walls are closing in on him in his solitary confinement prison cell, so he desperately makes an escape. With the police in pursuit, he ducks into a hotel and enters the elevator. The confined space of the elevator, reminiscent of his cell, unhinges his mind and he sits motionlessly while the police close in.

A man falls in love with a ghost and she doesn't tell him that she's dead because even the dead want to be loved too and she knew that he'd flee in terror if he found out. He does run from her, out into the street, where he is struck and killed by a car. She tells him that he is now one of the dead and he is happy they can spend eternity together.

Retrieved from "https://heykidscomics.fandom.com/wiki/Witching_Hour_Vol_1_23?oldid=1468003"
Community content is available under CC-BY-SA unless otherwise noted.