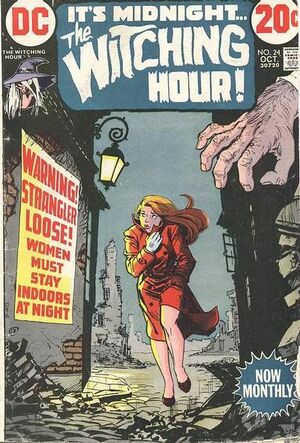 Appearing in "Where Nightmares Never End"Edit

Synopsis for "Where Nightmares Never End"Edit

Appearing in "Another Candidate for the Morgue"Edit

Synopsis for "Another Candidate for the Morgue"Edit

A waitress works evenings and both a policeman and the owner offer to walk her home as there is a killer on the loose, but she prefers to accompany a customer. When he offers to walk her home, she accepts. On the way, she pulls a knife out from under her coat and reveals herself as the killer to the policeman who was following her in order to protect her.

Appearing in "When the Scorpion Strikes"Edit

Synopsis for "When the Scorpion Strikes"Edit

A man has a recurring nightmare that he is a spider about to be stung by a scorpion. The dream disturbs him so much it takes a toll on his social life and finally his wife threatens to take the children and leave unless he sees a doctor. The psychologist recommends that he focus on his current life and when he joyfully tells his wife the doctor thinks he can be cured of the nightmare he is startled when she disappears in front of him. His children and his house fade away as well and in its last moments the spider realizes that it was fantasizing it was a man to escape the terror of dying from the scorpion's tail.

Retrieved from "https://heykidscomics.fandom.com/wiki/Witching_Hour_Vol_1_24?oldid=1468005"
Community content is available under CC-BY-SA unless otherwise noted.