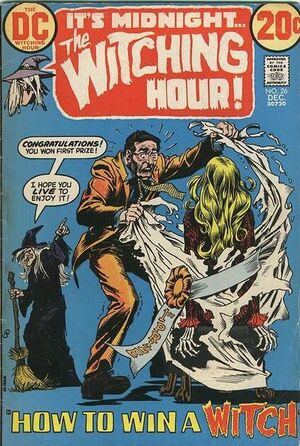 Appearing in "End of an Executioner"Edit

Synopsis for "End of an Executioner"Edit

A story about a sad executioner when all states outlaw capital punishment.

Appearing in "World of Memories"Edit

Synopsis for "World of Memories"Edit

A man dies in an apartment fire and his afterlife punishment consists in viewing his past the way it really happened instead of the way he imagines. For example, he repeatedly tells his wife that he once saved a child from drowning, but what really happened was that he slipped and fell into the water while attempting to leave the scene without providing aid. Not only that, bu he fights the child in order to secure a floating log. The boy manages to make it to shore as well and the man goes over to administer cpr. A crowd gathers and someone suggests the man must have tried to save the child and that is the version of events the man deludes himself with years later as a fabricated memory.

Appearing in "How to Win a Witch!"Edit

Synopsis for "How to Win a Witch!"Edit

A man buys a lottery ticket about winning a witch and when he returns home he finds to his surprise that he has won. He tells the witch that he wants to get rid of his wife, but every magical method she suggests he has second thoughts and tells her not to go through with it. Eventually she becomes frustrated and suggests that he really doesn't want to get rid of his wife. When he tells her to leave she reveals that she was his wife in disguise all along. She is happy that he doesn't really want to get rid of her, but he despairs that now he is stuck with a bully and a witch all wrapped into one.

Retrieved from "https://heykidscomics.fandom.com/wiki/Witching_Hour_Vol_1_26?oldid=1468009"
Community content is available under CC-BY-SA unless otherwise noted.