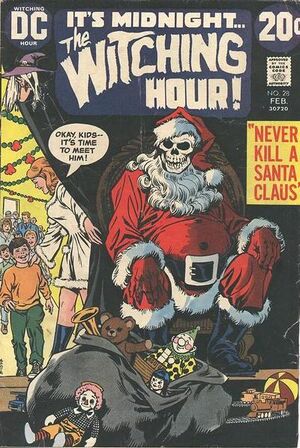 Appearing in "Kill Me Lest You Die!"Edit

Synopsis for "Kill Me Lest You Die!"Edit

A man is cursed by a witch to turn into a blood-thirsty lunatic every night. The witch confronts the man and his pretty young wife during the evening, hoping to win favor with her by saving her life, but the lunatic disarms the witch and kills him thus ending the curse.

A department store Santa is murdered after witnessing embezzlement. His ghost returns to agitate the killer until he is electrocuted by a loose phone line. With the killer's death, the Santa dissolves into a skeleton, frightening the children lined up to sit on his lap. As the skeleton dissipates into nothingness, he wishes them all a Merry Christmas.

A prankster takes his sleeping buddy out to an open cemetery grave and lowers him inside. He waits until the victim of the practical joke wakes up and panics. He shows himself and laughs so hard that he has a heart and falls into the open grave stone dead.

Retrieved from "https://heykidscomics.fandom.com/wiki/Witching_Hour_Vol_1_28?oldid=1468012"
Community content is available under CC-BY-SA unless otherwise noted.