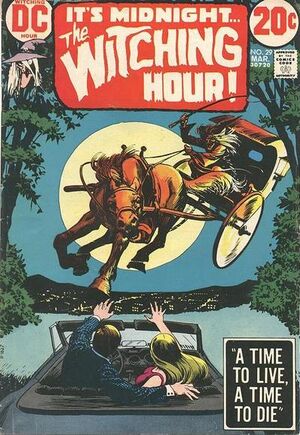 Appearing in "It's Your Funeral!"Edit

Synopsis for "It's Your Funeral!"Edit

An escaped convict opens a crate on the dock hoping to find a boat and it turns out to be an ancient Egyptian solar ship. He is transported back in time where he falls in love with the ruler's daughter, and since they are long dead, the priest kills him so that the solar ship will transport his soul back to them. The boat finds itself back in the museum exhibit bearing the mummified corpse of the convict.

Appearing in "To Perish By the Sword"Edit

Synopsis for "To Perish By the Sword"Edit

A bull fighter survives his final fight with a bull before retiring only to trip on his cape and impale himself on his sword.

Appearing in "A Time to Live -- A Time to Die!"Edit

Synopsis for "A Time to Live -- A Time to Die!"Edit

The son of the manor's lord disappears three years ago and the man's wife takes ill. When he hears about a boy turning up who has lost his memory he decides to attempt to fool his wife with the lad, passing him off as their child returned to them. It works, and the family servant goes along with the scheme because he wants to plant the idea in the child's mind that the boy wanted to kill his father. The boy and the manor lord go out hunting and the servant hears a shot ring out and thinks the boy has shot the man he believes to be his father, but the boy reveals himself to the servant as an evil spirit which disappears leaving the servant as the fall guy for the manor lord's murder.

Retrieved from "https://heykidscomics.fandom.com/wiki/Witching_Hour_Vol_1_29?oldid=1468014"
Community content is available under CC-BY-SA unless otherwise noted.