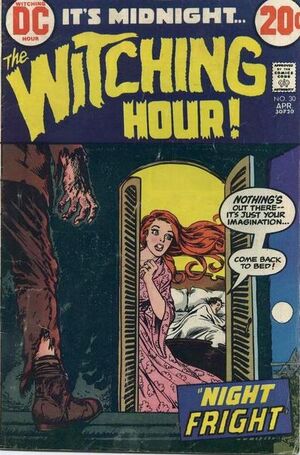 A young couple buy a run-down hovel that is supposed to be haunted and fix it up. When they are accosted by an escaped dangerous lunatic, the house helps them fend him off until police arrive.

A boy passing by a cemetery is accosted by ghosts that he flees from as they want him to join them in the grave. He meets the ghost of his grandfather who admonishes the other ghosts to leave the kid alone and tells the boy to return home. After the child returns home and views his body lying in state, he realizes that he is a spirit just like the others and returns to the cemetery to join them.

Appearing in "The Madmen of Montreuil"Edit

Synopsis for "The Madmen of Montreuil"Edit

A man and his wife spend an evening at a chateau where King Louis and Marie Antoinette were held before they were beheaded and encounter their ghosts begging to be freed.

Retrieved from "https://heykidscomics.fandom.com/wiki/Witching_Hour_Vol_1_30?oldid=1468016"
Community content is available under CC-BY-SA unless otherwise noted.