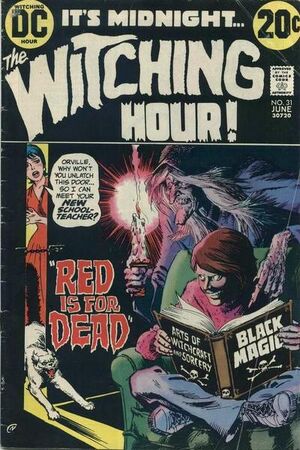 Appearing in "Red is for Dead"Edit

Synopsis for "Red is for Dead"Edit

A boy reading a book on black magic draws a red line through his hated step-mother's name in the phone book hoping a curse will strike her. He doesn't believe that it actually will work, however, she does indeed drop dead.

Appearing in "A Badge of Courage"Edit

Synopsis for "A Badge of Courage"Edit

The assistant of a knife thrower resents his jealously so she moves her head purposely during the act to intercept the knife and disfigure herself. She worries that she may have paid too high a price to destroy the knife thrower's confidence, and that her intended husband may reject her, but the man tells her every time he looks at the scar he will be reminded how brave she is.

Appearing in "The Scent of Death"Edit

Synopsis for "The Scent of Death"Edit

A mute simple-minded boy unravels the plot of a murderer to frame him when the murderer attempts to shove him off the church tower so that the boy can't identify him as the killer. The boy uses his great strength to seize the killer and lower the two of them down to the townspeople below. He tosses the guilty man at the sheriff and the school teacher realizes that the boy had recognized the dead man's killer in the dark by his enhanced sense of smell. The sheriff arrests the guilty man and the boy's parents resolve to treat him better.

Retrieved from "https://heykidscomics.fandom.com/wiki/Witching_Hour_Vol_1_31?oldid=1468019"
Community content is available under CC-BY-SA unless otherwise noted.