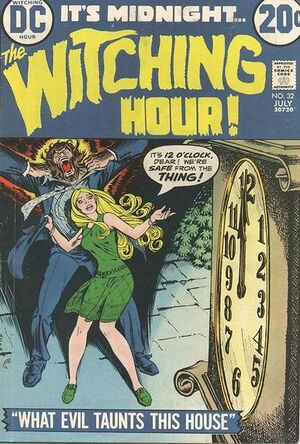 Appearing in "What Evil Taunts This House?"Edit

Synopsis for "What Evil Taunts This House?"Edit

A werewolf knows that eventually he will be hunted down and killed so he takes out a two million dollar life insurance policy in order to provide for his elderly mother. This draws the attention of the insurance agent who prepared the policy so the man begins nosing around his client's house and the night of the next full moon the agent does in the beast with a silver letter opener.

Appearing in "Too Young to Die!"Edit

Synopsis for "Too Young to Die!"Edit

A Japanese lab assistant murders a scientist who has developed a youth potion so that he may by young again. When Imperial Japan goes to war he is drafted to serve the emperor and shot to death by marines. His last thought is if he hadn't murdered the researcher he would now be alive, old but alive.

Appearing in "Name Your Poison"Edit

Synopsis for "Name Your Poison"Edit

A drifter poisons a farmer after the man agrees to make him his heir in exchange for working the farm. The farmer's ghost comes back for revenge, but he can't kill the drifter directly, so he makes the drifter believe that his attempts to kill the farmer are unsuccessful until finally the farmer has the drifter so riled up in the loft that he swings a shovel at the farmer and loses his balance to fall down and break his neck. The ghost of the drifter confronts the farmer's ghost whereby the latter admits to lying about being dead in order to acquire revenge.

Retrieved from "https://heykidscomics.fandom.com/wiki/Witching_Hour_Vol_1_32?oldid=1468020"
Community content is available under CC-BY-SA unless otherwise noted.