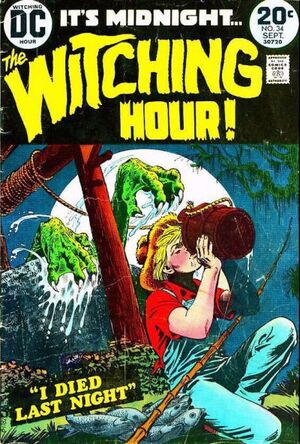 Appearing in "Dracula Had a Daughter"Edit

Synopsis for "Dracula Had a Daughter"Edit

A man is angry after being spurned by Dracula's daughter, so he gets a man that he doesn't know is Dracula's brother to spread rumors that the woman is a vampire in promise for payment. When he drops by to pay the money he owes he learns to his regret that Dracula's brother is the vampire in this story.

Appearing in "Over My Dead Body"Edit

Synopsis for "Over My Dead Body"Edit

A criminal has his picture taken unwillingly by a photograph taking pictures on the street and wants to get the film so no one knows that he is back in the country. He follows the photographer home and at first phones him with an offer to buy the film but he is refused and so threatens the photographer. The photographer confides in his voodoo practitioner friend, so the friend offers to lay a curse upon the criminal's photo. When the criminal breaks into the photograph's house that night he intends to shoot the photographer and search for the film. Instead, he shoots a photo of himself that has a voodoo curse on it and dies straight away.

Appearing in "I Died Last Night"Edit

Synopsis for "I Died Last Night"Edit

An obituary writer stumbles upon an insurance scam attempt by a man who fakes his death by drowning so that his wife can get the pay off and the two of them can disappear. The man rents a shack out in the woods to make arrangements with his wife and the writer tails the wife to the location. The man intends to shoot the writer to keep him quiet and sends the wife back home. The old woman that he rented the shack from spoils his shot as she isn't happy about the idea of murder being committed on the premises. The writer runs outside and doubles back to the well, but the man has guessed he would do that and is waiting for him. The old woman sics her cat on the man and he falls into the well. The obituary writer is glad that his reputation has been upheld as the midnight edition of the paper has gone to press claiming that the man in question did indeed die by drowning.

Retrieved from "https://heykidscomics.fandom.com/wiki/Witching_Hour_Vol_1_34?oldid=1468024"
Community content is available under CC-BY-SA unless otherwise noted.