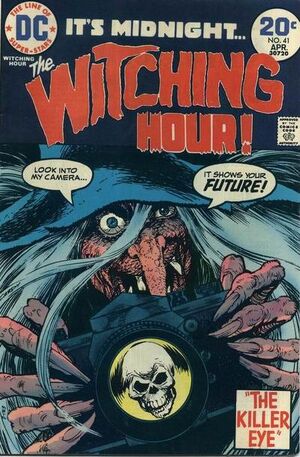 Appearing in "The Corpse That Lived Twice"Edit

Synopsis for "The Corpse That Lived Twice"Edit

In Pompeii a fortune teller issues a warning to a woman that she and her descendants will die a horrible fiery death if she betrays for wealth and power. The woman ignores the warning and is buried alive when the volcano explodes. During WWII, a fortune teller repeats the warning and story to a young woman in England who wonders if she will suffer the same fate. After a raid by German fire-bombers, she rushes home only to find that her husband has been burned alive after selling military secrets to the Germans.

Appearing in "Of Greed and the Grave"Edit

Synopsis for "Of Greed and the Grave"Edit

Appearing in "The Killer Eye"Edit

Synopsis for "The Killer Eye"Edit

A man at a carnival photographs his wife and in the background a gypsy is pickpocketing her victim. When the victim calls for police that he has been robbed, the cameraman sees the gypsy in the background of the photo and informs the police. The gypsy is enraged that her crime has been foiled and curses the camera. The man's wife is rattled, but refuses to give into superstition, so she photographs her husband and places the picture in her purse. Slowly, the man comes to realize that the camera curse is real and that he can harm photos and consequently harm the people in the photos. He uses this power for self-gain. When his wife has her purse snatched, the police fire shots at the robber. She gets her purse back and is chagrined to find that one of the bullets has passed right through the photo's forehead.

Retrieved from "https://heykidscomics.fandom.com/wiki/Witching_Hour_Vol_1_41?oldid=1468038"
Community content is available under CC-BY-SA unless otherwise noted.