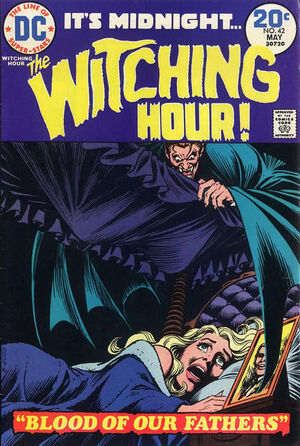 Appearing in "Freaked-out Wheel of Fortune"Edit

Synopsis for "Freaked-out Wheel of Fortune"Edit

A witch, looking for a mate unlike herself, tries a carnival dating game and is unknowingly introduced to a warlock.

Appearing in "Blood of Our Fathers"Edit

Synopsis for "Blood of Our Fathers"Edit

A man's cousin stages an elaborate hoax that the man has inherited the family curse of transforming into a huge bat on the night of the full moon because the cousin wants to marry the man's intended bride, unaware that the man really has inherited the curse. When the girl is attacked on the full moon before her wedding, the cousin stabs the huge bat to death in order to save her and learns the truth.

Appearing in "The Head That Haunted Gerald Hess"Edit

Synopsis for "The Head That Haunted Gerald Hess"Edit

When the D.A. frames an innocent man in order to further his political ambitions, he is set up by a subordinate who manages to get him to confess by making him think the D.A. is being haunted by the man he sent to the chair.