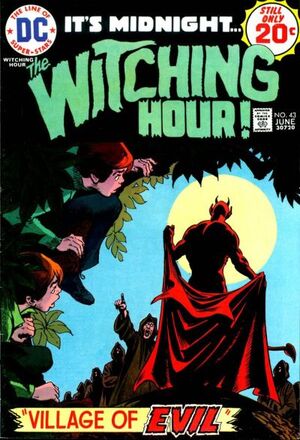 Appearing in "Village of the Vile"Edit

Synopsis for "Village of the Vile"Edit

Two girls cycle through a village where the locals practice evil deeds in order to make the Devil appear and lead them. When one of the children makes the 'mistake' of offering his handkerchief to one of the girls who has bloodied her ankle running from the townsfolk, the Devil rejects them.

Appearing in "The Gun That Couldn't Stop Killing"Edit

Synopsis for "The Gun That Couldn't Stop Killing"Edit

Appearing in "When Time Went Mad"Edit

Synopsis for "When Time Went Mad"Edit

A chemist invents three formulas, past, present and future, which allow travel through time. He gives the formulas to his son who uses them for criminal purposes until he swallows a little of each formula and winds up in limbo.

Retrieved from "https://heykidscomics.fandom.com/wiki/Witching_Hour_Vol_1_43?oldid=1468041"
Community content is available under CC-BY-SA unless otherwise noted.