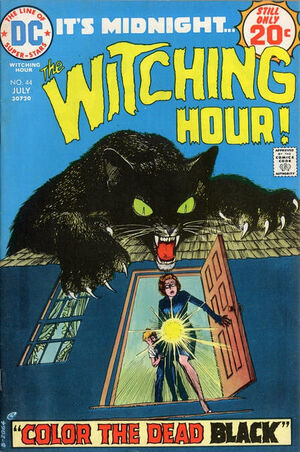 Appearing in "Color the Dead Black"Edit

Synopsis for "Color the Dead Black"Edit

During the time of the Black Plague, villagers wish to execute an old woman they consider to be a witch after stabbing her pregnant cat, but a man steps out of the crowd and informs the people that cats are their friends. Cats are the enemies of rats, the real carriers of plague. The villagers look for the cat they had wounded earlier in the woods, but it has died after giving birth. They nurture the kittens as protectors from the plague.

Appearing in "Better Off Dead!"Edit

Synopsis for "Better Off Dead!"Edit

A young woman meets a man who claims to represent a stage hypnotist and he begins a relationship with her after he encourages her to seek employment as the hypnotist's assistant. She finds out after the manager tries to marry her that all along she was hypnotized into believing the hypnotist and the manager were two separate people.

Appearing in "Kill the Demon Tiger!"Edit

Synopsis for "Kill the Demon Tiger!"Edit

A British hunter flies into India in order to bag a tiger that has been giving the villagers grief and the local dentist makes a surprising discovery examining the animal's corpse that it has the same gold fillings in its teeth that he had given a strange solitary villager earlier that morning.

Retrieved from "https://heykidscomics.fandom.com/wiki/Witching_Hour_Vol_1_44?oldid=1468043"
Community content is available under CC-BY-SA unless otherwise noted.