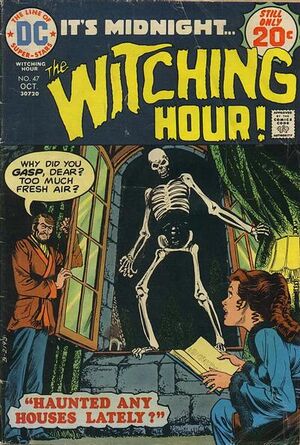 Appearing in "Who Must I Kill Tonight?"Edit

Synopsis for "Who Must I Kill Tonight?"Edit

A respectable citizen develops a contract-killer personality which manifests at night unknown to him. He snaps out of it when the second personality demands that he kill his wife as she has begun asking too many questions.

Appearing in "The Day Happy Died!"Edit

Synopsis for "The Day Happy Died!"Edit

A boy thinks his dog has died in a house fire, but when he catches sight of him the dog leads him into the cemetery to a particular grave where the boy realizes that he is the one who died in the fire and his pet isn't a ghost.

Appearing in "Haunted Any Houses Lately?"Edit

Synopsis for "Haunted Any Houses Lately?"Edit

Two men plot to murder one man's wife and blame it on a castle ghost, but she discovers the plot and schemes with the real ghost of the castle to destroy the two conspirators.

Retrieved from "https://heykidscomics.fandom.com/wiki/Witching_Hour_Vol_1_47?oldid=1468049"
Community content is available under CC-BY-SA unless otherwise noted.