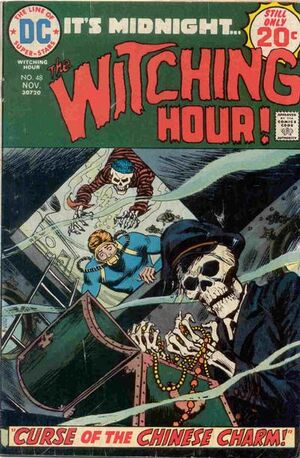 Appearing in "There's a Skeleton In My Closet!"Edit

Synopsis for "There's a Skeleton In My Closet!"Edit

A brother-in-law executes a murder plan so that he can claim the estate, but what he doesn't know is that his victim had a wife who is plotting the killer's death in turn.

Appearing in "Tragedy in Lab 13!"Edit

Synopsis for "Tragedy in Lab 13!"Edit

A man attempts to steal a new miracle cure from Dr. Chang by getting the doctor's secretary to go along with a plot to poison all three of them with a bottle of wine and extort the formula from Dr. Chang in order to save their lives. The idea seems to be working as Dr. Chang gives the safe combination to the secretary, but when the quickly expiring couple make it to the lab to mix up the drug the secretary finds that the doctor's notebook is written in Chinese.

Appearing in "Curse of the Chinese Charm!"Edit

Synopsis for "Curse of the Chinese Charm!"Edit

A woman's ambition to gain wealth sends two suitors to their doom when she acquires a Chinese charm that supposedly gives luck to the ambitious, but it just weighs the men down when they dive for shipwreck treasures making them easy prey for a hungry shark.

Retrieved from "https://heykidscomics.fandom.com/wiki/Witching_Hour_Vol_1_48?oldid=1468051"
Community content is available under CC-BY-SA unless otherwise noted.