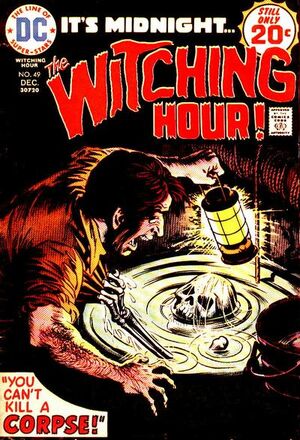 Appearing in "Bride of Satan"Edit

Synopsis for "Bride of Satan"Edit

One of Satan's minions receives a shock when he agrees to release a man from his signed contract in exchange for the man's beloved marrying him instead. The beautiful woman tells the man that she loves him too much to see him bound by the evil agreement, but in reality she is a disguised hag playing both parties for fools.

Appearing in "The Prisoners of Mortuary Island"Edit

Synopsis for "The Prisoners of Mortuary Island"Edit

Three convicts escape to mortuary island which they learn to their regret is teeming with plague victims.

Appearing in "You Can't Kill a Corpse"Edit

Synopsis for "You Can't Kill a Corpse"Edit

A criminal on the run from cops after a bullet grazes him sees a skull in a pond that he drinks from. He assumes that he was mistaken that the bullet grazed him and the skull is his reflection so he must be really dead. He thinks to hunt down the cops and kill them since they can't kill a corpse, but when he locates them they shoot him dead and he realizes that he was mistaken. The skull he saw in the water was from a body that had died there long ago.

Retrieved from "https://heykidscomics.fandom.com/wiki/Witching_Hour_Vol_1_49?oldid=1468053"
Community content is available under CC-BY-SA unless otherwise noted.