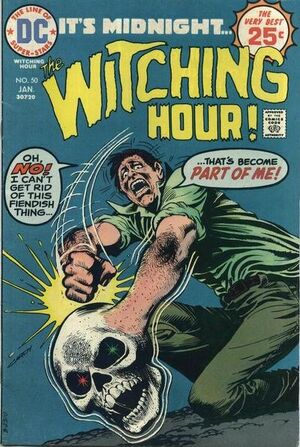 Appearing in "Those Eerie Eyes In the Grinning Skull"Edit

Synopsis for "Those Eerie Eyes In the Grinning Skull"Edit

An ex-con steals a skull with gems in its eye sockets from a curio shop owner hoping that it will lead him to a partner's stashed loot.

A vampire builds a haunted village as a tourist attraction to disguise his own feeding, but one of the locals gets wise to him and confronts him. The vampire flies off as a bat but gets impaled on a branch he attempts to land on when an underground explosion thrusts the tree limb up towards him. The phony horror attraction catches fire and burns down.

Appearing in "Let the Hangman Wait"Edit

Synopsis for "Let the Hangman Wait"Edit

A man sentenced to be hanged for a murder asks a witch to hide him. She agrees to send him into the past for 50 quid so that he can avoid the series of events which results in his conviction. He succeeds and returns to the present where he tells the witch he hasn't got the money. When she threatens to undo her spell, he kills her. He is apprehended and sentenced to hang for her murder. He sees her ghost on the scaffold and accuses her of tricking him, that she never sent him into the past. She answers that she did change the past, it was him who proved incapable of change.

Retrieved from "https://heykidscomics.fandom.com/wiki/Witching_Hour_Vol_1_50?oldid=1468054"
Community content is available under CC-BY-SA unless otherwise noted.