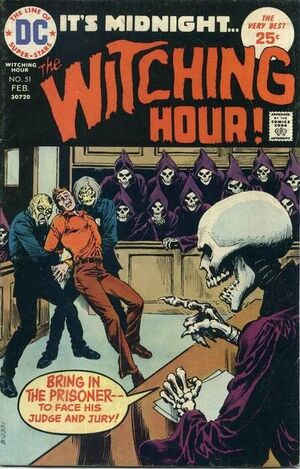 Appearing in "The Phantom Theater"Edit

Synopsis for "The Phantom Theater"Edit

Two thieves duck into a theater in order to hide from police after shooting a shop owner. The figures on the screen movie enter the room and pursue the pair. One of the men fires his gun which strikes a fire alarm. The thieves are saved by the fire department just as they are to be hanged, although their experience in the theater has caused their hair to turn white.

Appearing in "The Devil's Lottery"Edit

Synopsis for "The Devil's Lottery"Edit

The Devil gathers a group of people and tells them that he will collect 1,000 dollars from each of them and establish a trust fund to be paid out to the sole survivor of their children. The parents think this is a good shot at a member of their family becoming wealthy so they hand over the thousand dollars, but one of the participants is a mobster whose son sets out murdering his competition. When there are only two left, a husband and wife medical research team, the killer tracks them down in Africa to kill them but the husband gets the drop on him with a poison dart. The Devil gloats to the three witches of the Witching Hour that a peaceful man became a killer when money was on the line, but they counter he only killed the assassin to save his wife and ask the Devil what he did with his money. The Devil has to admit that the man built a state-of-the-art medical facility in Africa.

Appearing in "Have A Good Die"Edit

Synopsis for "Have A Good Die"Edit

A man plots to murder his wife and picks up a detective tailing him when he begins to become suspicious after she keeps luckily surviving near fatal accidents. The detective ends up having to arrest the wife after she shoots the husband and admits that she's wanted to kill him for years.

Retrieved from "https://heykidscomics.fandom.com/wiki/Witching_Hour_Vol_1_51?oldid=1468056"
Community content is available under CC-BY-SA unless otherwise noted.