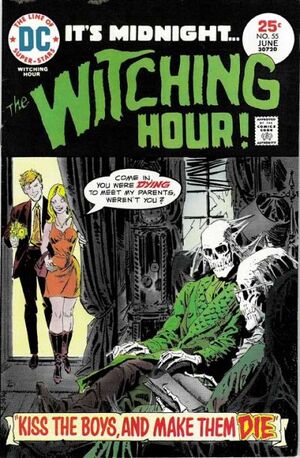 Appearing in "Kiss the Boys and Make Them Die"Edit

Synopsis for "Kiss the Boys and Make Them Die"Edit

A man is attracted to a woman who murders would-be suitors in order to keep her dead parents company.

A rich man badly burned in an accident marries a witch who agrees to use her powers to make him appear normal, but she abuses the servants and the butler gets fed up and kills her. The wealthy man returns to his hideous state.

Appearing in "Stand-in for a Corpse"Edit

Synopsis for "Stand-in for a Corpse"Edit

A morgue attendant finds a photo of an attractive girl and some letters promising one hundred thousand dollars as a wedding gift on a corpse and decides to stand in for the dead man. When he arrives at the girl's home he discovers she is part of a Satanic cult and after the wedding ceremony veil is lifted revealing a dead girl. The family tells him that since the girl has died of food poisoning Satan has decreed that her husband must die of poisoning as well. He escapes the house but ends up bitten by a snake. When he finds a rusty discarded razor blade he uses it to cut and suck the wound. The man thinks he has avoided his fate, but he dies, and when the morgue attendants catalog his body they comment that there are no poisonous snakes in the area and that the man had infected himself with the razor blade.

Retrieved from "https://heykidscomics.fandom.com/wiki/Witching_Hour_Vol_1_55?oldid=1468064"
Community content is available under CC-BY-SA unless otherwise noted.