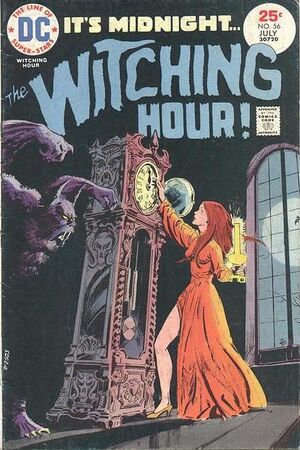 Appearing in "What Drove Him Bats?"Edit

Synopsis for "What Drove Him Bats?"Edit

A cave explorer comes across the remains of a vampire sorcerer's prism which was used to transform human victims into bats. One cave bat bumps him into the light from the prism and he finds himself transformed into a bat. He flies to the sorcerer's castle to look for a cure and discovers the bat there in human form that is responsible for his predicament. The explorer flies into a townsman who has pursued him with a stake and the townsman stabs the culprit, who transforms into a bat as he dies, reverting the explorer to human form.

Appearing in "Who Rides With Death!"Edit

Synopsis for "Who Rides With Death!"Edit

A waitress is fought over by two bikers, unaware that she is Death.

Appearing in "The Death of an Iron Lady"Edit

Synopsis for "The Death of an Iron Lady"Edit

A man demonstrates a life-like robot and a spy wants to rent the robot in order to steal invention plans. The man agrees to rent the robot to the spy on the condition that he doesn't send her out into the cold night and the spy agrees but does it anyway. The robot acquires the plans and brings them back to the spy but she has suffered damage from the weather. The man tracks his robot to the spy and confronts him about using the robot in the cold as she is now inoperable. The man advances on the spy who shoots him, but the bullets shred his clothes revealing the man is really another robot. The robot strangles the spy in anger that now he has to obtain the parts to build another wife.

Retrieved from "https://heykidscomics.fandom.com/wiki/Witching_Hour_Vol_1_56?oldid=1468066"
Community content is available under CC-BY-SA unless otherwise noted.